The Rhododendron Preserve is an incredible treasure in the heart of Kitsap County. The Preserve’s 466 acres holds one of the largest remaining examples of lowland virgin forest (170 acres) in the Puget Sound Basin. About 70 acres of old growth forest lies at its center. Ancient western red cedar and pine trees resistant to blister rust complement the landscape. The Preserve is also home to an impressively big, old growth Douglas fir we affectionately call Big Tree. 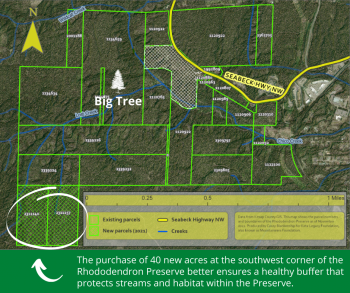 We are overjoyed to announce that the Rhododendron Preserve has expanded by 40 acres. It went from 426 acres, to 466 acres in 2021. It is all thanks to our amazing donors who care about land preservation. A special thanks to Mark Mauren of Ueland Tree Farm for allowing Mountaineers Foundation also known as Keta Legacy Foundation to purchase land from the tree farm.

As development increases, this island of nature will gain importance both to the abundant wildlife that inhabit the Preserve and adjoining forest lands and to generations of people with fewer opportunities to experience such a place.

The watershed contains approximately 68 miles of streams, 17 of which provide spawning and rearing habitat to salmon. The watershed produces runs of chum, Coho, steelhead and cutthroat trout in the tens of thousands each year.

The Preserve protects an ecological hotspot in the Pacific Northwest. As a natural area, the Preserve helps to maintain biodiversity of native species, and provides a natural classroom and laboratory where both education programs and scientific research take place. The Rhododendron Preserve is maintained according to the most recent Management Plan.

People have been protecting this land since 1915, when the original 74 acres was purchased by The Mountaineers with the help of Edward Paschall of Hidden Ranch. Edward Paschall’s daughters, Mary and Patience, donated an additional 57 acres to the Preserve in 1955 and 1963. Patience lived on Hidden Ranch until 1978 when she passed away. The Preserve gradually grew to 180 acres by 1986. That same year, the land was deeded to the Mountaineers Foundation (now doing business as Keta Legacy Foundation), to be held in perpetuity as a nature conservancy.

Over the years the Foundation has actively added acreage to the Rhododendron Preserve and today it totals 466 acres. We will continue to grow the Preserve and support other efforts to conserve this critical habitat through generous donations to our Land Acquisition program.

In 2014 the Foundation developed a blueprint for the Kitsap Discovery Center. The Center’s vision encompasses a learning center that can be a conservation education clearinghouse for all students, kindergarten through adult. Our vision is beginning to be realized as Kitsap School District students and Olympic Community College students are brought to the Preserve to learn and work. We have hosted Earth Day activities, volunteer work parties, and biological research throughout our acreage.

Join our newsletter email group to get quarterly news and event invitations.